To share your memory on the wall of William Langan, sign in using one of the following options:

Receive notifications about information and event scheduling for William

We encourage you to share your most beloved memories of William here, so that the family and other loved ones can always see it. You can upload cherished photographs, or share your favorite stories, and can even comment on those shared by others.

Posted Jan 10, 2021 at 11:17am
Bill and I both grew up in western Pennsylvania. He kept far better track of events in W.PA. than I did. He loved to tease and remind me of our roots. The funniest event I recall was when he put an article he had copied from the Pittsburgh Post-Gazette in my locker at DCC. The headline was 201 arrested at wedding reception riot in Ellwood City. An Irish catholic boy and an Italian catholic girl were wed and their reception was held at the Sons of Italy hall. The reception participants became argumentative and it ended up in a brawl which was finally put to rest by the State Police since the local police were disarmed by the wedding guests. Forever after Bill would ask me if I had been to any weddings at home. He will be missed.

Posted Jan 08, 2021 at 12:00am
I first met Cousin Bill at their wedding when I was 13 years old as a Junior Bridesmaid. He was always fun to be around and I enjoyed staying with them in New Jersey and visiting with them at their home. In Doylestown. He worked hard and enjoyed life. I will miss him. .
Comment Share
Share via:
DG

Posted Jan 07, 2021 at 05:33pm
Judy: so sorry to hear about your loss. We always enjoyed his witty company. He had some great stories.
Condolences.
Diane Glossman and Dick Magruder
Comment Share
Share via:
LB

Posted Jan 07, 2021 at 12:48pm
Judy, we are very saddened to hear about Bill's passing. Have many memories of his caring participation with our Bucks County Chapter fund raising for Fox Chase cancer research. We wish the best to you and family in this difficult time. Lee & Ginny Beyer
Comment Share
Share via: 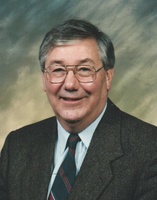