To share your memory on the wall of Stella Kaskiel, sign in using one of the following options:

Born in Girardville, Pa. on November 12, 1918, Stella was the daughter of the late John and Sophia (Hnyda) Potchynok, both Ukrainian born immigrants.

Stella was the former wife of the late Michael Jushchyshyn and the late Leon Kaskiel.

The Potchynok family returned to Ukraine after some time, where Stella was raised, working on her family’s farm. In July 1936, when pre-war conditions became overly dangerous, Stella’s family sent her back to America via steamer from France to New York City. Stella worked as a maid to several clients until she met her first husband, Michael Jushchyshyn, and married at St. Georges Ukrainian Catholic Church N.Y.C. The new family started a grocery business, and then a restaurant business, and expanded with the births of John in 1943, Steven in 1947 and Richard in 1951. In mid 1950’s, the family moved to Prospectville, PA, where Stella raised the children and, in the late 50’s, made her career in the electronics manufacturing industry first with Philco-Ford in Lansdale and then with Leeds & Northrup in North Wales, PA, enabling the family to afford college expenses for all of her children. Stella’s husband Michael passed away in 1971. After retiring, Stella then assisted her son John in the operation of retail beer and beverage distributorship. For years, Stella was active at Saint Anne Ukrainian Catholic Church in Warrington, where she was a founding member. She was a dedicated supporter of the church events, especially perogie making and bread baking. Years later, Stella met Leon Kaskiel and married at St. Anne’s, taking his last name. Leon sadly passed away 6 months after they married, and Stella became a widow again. She lived happily the rest of her life in her Prospectville home, socializing with family, neighbors and new friends, until needing assisted living beginning at the age of 95.

Stella is survived by her sons John (Caroline), Steven (Judy), and Richard Jushchyshyn (Joyce) and her sister Virka in Ukraine.

A private graveside service will be held at St. Mary’s Cemetery in Elkins Park.

A Memorial Mass and luncheon to celebrate her life will be announced at a later date.

Receive notifications about information and event scheduling for Stella

We encourage you to share your most beloved memories of Stella here, so that the family and other loved ones can always see it. You can upload cherished photographs, or share your favorite stories, and can even comment on those shared by others. 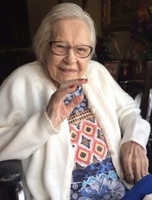