To share your memory on the wall of Donald Steppling, sign in using one of the following options:

Print
Donald Joseph Steppling, loving husband, father, grandfather and great-grandfather passed away on December 4, 2020 at his home in Warrington.

Don was born on July 13, 1929 in Lawrenceville, PA, where he attended Central Catholic High Sch... Read More
Donald Joseph Steppling, loving husband, father, grandfather and great-grandfather passed away on December 4, 2020 at his home in Warrington.

Don was born on July 13, 1929 in Lawrenceville, PA, where he attended Central Catholic High School and the University of Pittsburgh. He met his wife Catherine (Kitty) Butler of 69 years in Pittsburgh at a local dance and spent his life making her happy. Together they raised seven children, Ken, Karen (Dave) McKean, Patricia, Nancy (Larry) Ejzak, Linda Wirth, Carolyn (Greg) Palermo and Cindy (Rob) Lah in Allison Park, PA, before moving to North Carolina and ultimately to Bucks County, PA.
He will be welcomed into heaven by his beloved son, Ken and his son-in-law Gary Wirth, as well as by his parents, Anthony and Helen, three brothers and three sisters. In addition to his children, he leaves behind a sister, Anna Marie (Chuck) Staub, his brother-in-law Francis (Hoffy) Hoffman (Rita Butler), 11 grandchildren, Brad (Melissa) McKean, Tim (Jenna) McKean, Stephanie (Charlie) Bigelow, Zachary (Brooke) Ejzak, Tyler (Sierra) Ejzak, Shelton Wirth, Allison Wirth, Spencer (Maddy) Palermo, Mikala Palermo, Luca Lah and Helena Lah, five great-grandchildren, Miles, Max, Addilyn, Jack and Elliott, and more grand-dogs and cats than can be counted.
Don was a drafting engineer who worked on large public works all over the United States, including the Washington, D.C. subway, the Hoover Dam, and the Fort Pitt Tunnel in Pittsburgh. He loved handball, golf and the Steelers. He treasured spending time with his family, and the highlight of his year was the biannual reunion/vacation in North Carolina, which started with 17 people and blossomed into 35. His laugh was infectious and he welcomed every person like a future friend. He was always quick with a joke, a handshake and a scotch. He loved music; the morning of each of his daughter’s wedding he played and sang Going to the Chapel.

Don’s Funeral Mass will be celebrated at St. Cyril of Jerusalem Catholic Church, 1410 Almshouse Road, Jamison, PA on Monday, December 7, 2020 at 11:30am The family will receive friends at the church from 10:15am until 11:15am, when words of remembrance will be begin. Internment at St. Mary’s of the Assumption Catholic Church in Pittsburgh, PA., will be announced at a later date.

Receive notifications about information and event scheduling for Donald

We encourage you to share your most beloved memories of Donald here, so that the family and other loved ones can always see it. You can upload cherished photographs, or share your favorite stories, and can even comment on those shared by others.

Posted Dec 26, 2020 at 07:14am
Dear Cindy and family, Our sincere heartfelt condolences to you and your family. Your fathers memory will love on forever. Love, Michael and Fabrizio

Posted Dec 14, 2020 at 02:51pm
We are so very sorry to hear of Don's passing - we will always remember his warmth and kindness. We send lots of love to you all!

With much Love, Sam, Scott and Mongo

Posted Dec 12, 2020 at 07:22pm
We send deepest condolences to the Steppling-Lah family. We are so sorry to hear of Dad's passing.

Posted Dec 07, 2020 at 03:20pm
Thinking of the wonderful Dad you were! Thank you for raising such wonderful children. I was blessed knowing your family! Love, Bev Ellis

Thank you so much, Bev. This is beautiful! ❤️
HF

Thank you so much for your love and deep friendship during this sad time in our lives. Love you forever!! 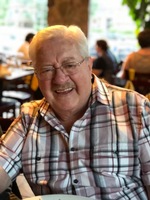