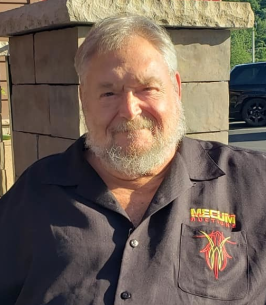 Wayne M. (Corky) Rickards of Upper Black Eddy passed away suddenly on Sunday, February 13, 2022 at Doylestown Hospital at the age of 71. He was the husband of Theresa M. (Terri Rossi) Rickards. Together they shared 47 years of marriage.
Born in Philadelphia, Wayne was the son of the late Charles P. Slother and Mary Alice (Jameson) Rickards, having been adopted at an early age by Lyle H. Rickards, Jr. Corky was a proud member of the Central Bucks class of 1969. He also attended many Fire Science courses at Montgomery County Community College.
Wayne and Terri lived in a farmhouse in Plumsteadville for 10 years, ironically at the present site of Shelly Funeral Home. He was a volunteer fireman with Plumsteadville Fire Company and worked with the ambulance crew there from 1979 until 1984. He also volunteered at Doylestown Fire Department and was an instructor at the Bucks County Fire School during that time. While living in Plumsteadville, he was also a township Republican Committeeman. In 1984, the family moved to a property in Upper Black Eddy, which was a source of great happiness for Wayne for many years to come.
Wayne operated heavy equipment, then worked with the County of Bucks, both as a prison guard and in building maintenance. In 1995, he found his true occupational calling in disaster restoration, working for companies such as Paul Davis, Servicemaster and Mark 1 Restoration. He began as a technician, assisting those with fire, water or mold damages and worked his way up to being a Senior Estimator/Project Manager, of which he was very proud. He loved helping people put their lives back together after damage to their homes or businesses. Until the time of his passing, his friends called on him with disaster-type questions and he gladly gave advice, either by phone or going to their site. He was most happy when he could give comfort to others, knowing how easily his company could restore their homes to pre-disaster situations.
In addition to his wife, Terri, he is survived by his daughters Gretchen Rickards (Neal Das) and Jennifer Lynn (Jeff) Becker. He was the brother of Lisa (Keith) Preston, John (Diane) Rickards and Lyle Rickards III. He is also survived by his grandchildren Matthew and Madison Becker and Philippa and Winifred Das.
In his marriage, Wayne was constantly in the company of his wife, Terri. They had a relationship where they could finish each other’s sentences (which was beneficial being over 60 years of age) and knew what each other was thinking just by a look on their face. They enjoyed snowmobiling, boating with friends at a boat ramp in Point Pleasant, PA, and riding Harleys. Most recently, while they were retired, they enjoyed long drives, often to get lunch or dinner at their favorite restaurants, sometimes as far away as Belmar, NJ or Marshall’s Creek, PA, or simply enjoying the sunshine on their deck or holding hands in their reclining chairs while watching news or shows.
Corky was an avid deer hunter. His trophy deer were displayed in their home and until recent years, the Monday after Thanksgiving was much like a sacred holiday when he hunted locally with many of his buddies. He was also an award-winning photographer with many pictures of the wildlife of Bucks County. Additionally, he was an excellent dancer, in part from skills learned from Sock Hops with his Central Bucks classmates. He and Terri enjoyed many years of dancing with their many friends.
Corky could be a gentle giant or a raging bull, but if you resolved your differences, you had a friend for life with him. He would give the shirt off his back with no limit of financial or time expenditure on his part. He loved talking to people and could regale you with amusing and funny stories from his colorful past, though it may have taken an hour for him to tell you what could have been said in five minutes, all the while telling you, “To make a long story short…” His family was his pride and joy and within a short time after meeting him, you knew how proud he was of his daughters and their families and how much love he had for his wife.
The family is planning a celebration of Wayne’s life to be held in late May. The exact time, date and details will be announced at a later date.
In lieu of flowers, memorial contributions in Wayne’s memory may be sent to Plumsteadville Fire Company or the American Heart Association.