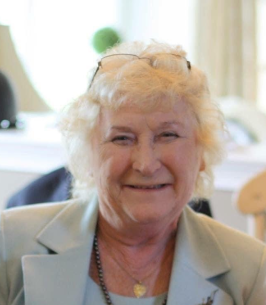 Marie Huggett (nee Hickey) of Warwick passed away on Thursday December 9, 2021, at Doylestown Hospital surrounded by her family. Marie was 84 years old.

Born in Limerick, Ireland, Marie was the daughter of the late Thomas and Mary Hickey (nee Hartnett). Marie had immigrated to the United States in 1966.

Marie was the wife of Raymond F. Huggett, Jr. who together they shared 53 years of marriage.

Marie was a seamstress by trade and also worked as a hostess at the Shack in Philadelphia, and in her later years as a food service worker at Archbishop Wood High School in Warminster for many years. In her free time, Marie was involved at church and had a strong devotion to the blessed mother and enjoyed gardening, reading, traveling and entertaining family and friends.

In addition to her husband Raymond, Marie is survived by her son Raymond T. (Angela) Huggett. She was the sister of Thomas Hickey and Dolores Huggett and the late Teresa O’Brien and Ann McGrath. She is also survived by her grandchildren Anmarie and Sean Huggett and many nieces and nephews.

Marie’s Funeral Mass will be celebrated at 11:00am on Wednesday, December 15, at St. Cyril of Jerusalem Church, 1410 Almshouse Road, Jamison. The family will receive friends at the Church from 10:00am until the time of service. Interment will follow in St. John Neumann Cemetery, Warrington Township.

In lieu of flowers, donations can be made to the Catholic Charities Appeal