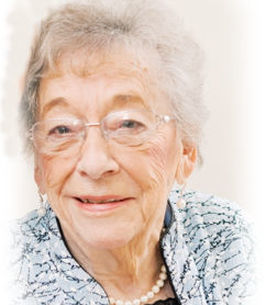 Marguerite Walsh “Peg” passed away on Monday August 15, 2022 at Anne’s Choice in Warminster. Peg was 98 years old. Peg was the wife of the late Edward W. Walsh who had passed away in 1997. Together the couple had shared 39 years of marriage.

Born in New York City, NY, Peg was the daughter of the late Patrick and Nora (Ryan) Dunne.
In her free time Peg enjoyed spending time with her family, especially her grandchildren. She also was an avid reader and enjoyed knitting.

Peg is survived by her children Eileen O’Hara (Dennis), and Edward Walsh (Anita). She was the grandmother of Brittany O’Donnell (Jon), Emily Andrews (Dylan), and Ryan and Coleen O’Hara. She was the sister of Nora Soderquist (Robert), John (Dorothy), Patrick (Natalie), and Michael Dunne.

Peg’s Funeral Mass will be celebrated at 11:00am on Wednesday August 24, 2022 at the Nativity of Our Lord Church, Warminster. Internment will follow at St. John Neumann cemetery. The family will receive friends at the church from 10:00am until the time of Mass.